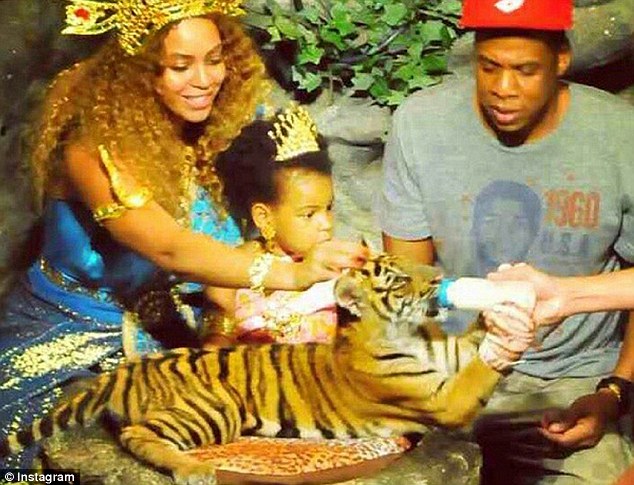 I’d like to begin by saying that in some ways I truly admire you. Perhaps we have different views on some (or many) social issues, but I do see in you a deep desire to be kind to others. You seem to put great effort into being a progressive and independent woman and a role model not only to entertainment-obsessed masses, but to the youth of America (this includes your young daughter). I think it was, perhaps, a mother’s love and the need to provide your daughter with extraordinary opportunities, that you, yourself, never had, that was the impetus behind what was an incredibly misguided, but well intentioned action.

You and your husband brought your young daughter to Thailand and whilst there paid to have your family photographed while bottle feeding a tiger cub. No doubt in your mind this would be an image captured forever on film that would allow your daughter to look back on that family trip and say “Wow, how fortunate I was to be part of such a ‘rare’ experience.” What you did not know, and what I think, sadly, you still have not realized, is that while this experience was, indeed, amazing, it was also a form of animal abuse. One that does not occur only in Thailand, but all over the world.

Sadly, the practice of ‘‘paying to play” is most prevalent here in the United States.

What seems like a harmless encounter to humans is, in actuality, just one brief moment in a lifetime of misery and abuse for these cubs. Here in America dozens of traveling zoos and roadside exhibits make quite a pretty penny by charging members of the public to pet, play with, or even swim with adolescent wild animals. The most common victims in the ‘pay to play scheme, are cubs of the big cats.

What the public doesn’t understand, is that the adorable babies they get to hold have been ripped from the care of their mothers, artificially orphaned, and thrust into a short life of suffering and abuse as nothing more than photography props.

The inhumane treatment begins early on with the removal of the cubs from their mothers. At this vulnerable age their immune systems are not fully developed and the intense stress and exposure from constant handling puts them at great risk for disease or fatality. Unnatural habitats and prolonged photo sessions leave the cubs unable to regulate their sleep patterns, which further damages their growth. Forced to endure being passed around like merchandise and exposure to flashbulbs, some of them develop vision and limb problems. Many suffer the removal of their claws and teeth, in order to guarantee the safety of the customers paying to hold them.

Others are starved in an attempt to stunt their growth, thus keeping them viable for use in ‘pay to play’ gigs even as they age. I will never forget the first time I watched a cub-handling encounter on YouTube.

The way the handlers roughly grabbed them and hung them by their armpits to “reset” them, claiming that this is how they would be held in the wild, blowing in their faces to “calm” them down. Or the heartbreaking cries of protest from the cubs as they were tossed from stranger to stranger simply for entertainment value.

As a mother, I am sure you can’t imagine letting anyone handle your child in such a way.

The luckiest cubs will grow too large or too aggressive to be useful as photo props, and subsequently will be spared the prison sentence of a life in captivity. Instead, they will be sold for use in canned hunts. Taken to open land and released for a few precious moment before the bullet of a paying hunter puts an end to their short-lived joy. Others will be butchered outright, their body parts sold on the blackmarket. As I said, those animals are the lucky ones. Many ‘pay to play’ cubs will, unfortunately, become part of the exotic animal trade, an industry which is surpassed in profit only by drugs and guns.

I share all this with you now, not to shame you. I know you have been slandered and criticized by many because of your actions. While I understand the anger that many people feel, what some fail to understand is that the fault lies not only on your shoulders. We must also blame a lack of education within our society. Fault also lies within our media. Commercials and television programs glorify the idea of turning wild animals into pets, and precious little attention is given to the vile underworld of animal trafficking and the abuse associated with ‘pay to play’ venues.

Why has so little attention been paid to this horrendous form of abuse?

Why is it allowed to go on legally in so many parts of our country and elsewhere in the world? Equally culpable are our lawmakers. At what point do we say, “We must change the laws that allow this to continue”?

Ms. Carter, you did not create the industry that propagates this kind of abuse, but I ask you now to take a stand against it. Channel your inner Sasha Fierce and speak out on behalf of those who have no voice of their own. We need your help. The baby wild animals need your help.

There is no shame in making a mistake, no matter how erroneous, if you acknowledge that mistake and embrace the change that allows you to become a more enlightened human being. I hope my words find you somehow through social media and that not only do they inspire you to instigate change, but that they help you realize that as human beings we are fallible. In the end you are not guilty of anything but remaining silent.

With warm regards and hope for the future of all the Earth’s children,

One thought on “With Great Power Comes Great Responsibility: An Open Letter to Beyonce on Cub Petting”