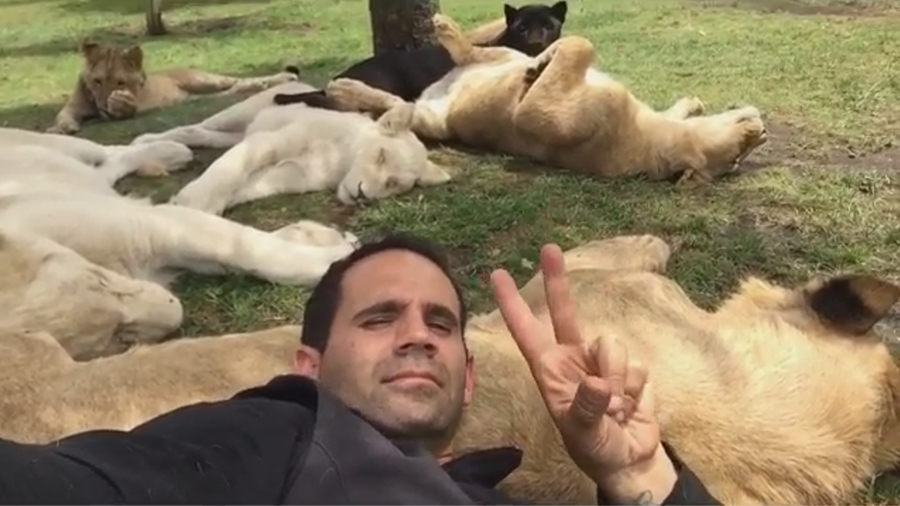 You know the part of the Matrix where Neo realizes that everything he thought was real and right was really just a continuous lie so skillfully fed to him that he accepted it because that was easier than trying to think any differently?

That’s where we are in the evolution of Black Jaguar White Tiger. Slowly, ever so slowly, news outlets on the internet are starting to notice the woeful few who have been speaking out against Eduardo’s dangerous pseudo conservation practices. The new outlets are noticing, and some of them are getting brave enough to post their own articles* on what seems like very obvious issues with a foundation that claims to have rescued over 200 big cats, yet releases daily videos of people doing things like twirling around with tigers draped over their shoulders, or chasing them around the dining room of a private home, and who only have a documented 8 acres on which to house those 200 big cats – though Eduardo claims to be ‘working on’ a ‘stage 3’ (which he already lists in his ‘Stages’ of rescue, despite not actually having a functioning stage 3)

From the BJWT FAQs page:

‘Stage 3 is coming soon. It will be hundreds, more likely thousands, of acres for our babies to live their lives happily, free of poachers, and safe from the other dangers and threats that society has placed on the environment.’

With over 4 million Instagram followers, BJWT has attained so much mass that often times anyone who dares to speak out against them is instantly attacked, mauled, and cast aside. No pun intended. The animosity BJWT shows to those who oppose it is especially aimed at of any genuine sanctuaries (read, GFAS accredited, which BJWT is not) who speak out publicly against Eduard Serio, or his Black Jaguar White Tiger foundation. With all the maturity of a pre-pubescent trust fund baby (Eddie is big on announcing that he’s got millions with which to sue “haters”) who believes themselves above reproach, Eduardo digs up photographs that are decades old, posting them to his Instagram along with snide comments and instructions for his follows to “look for themselves” at who his attackers really are. He then links to websites run by mysterious entities who have been called out by 911 Animal Abuse for their unsubstantiated claims against different sanctuaries – the same 911 Animal Abuse which has called out BJWT for their own activities.

In Eduardo’s own words from a recent (in the last four days) Instagram rant:

‘I rarely try to respond to the haters because it takes away from all the hard work I do for my kids and the Sanctuary and other people, almost 5,000,000 followers around the world who believe in BJWT however once in a while I feel compelled to respond to the one-sided, self-serving people that call themselves reporters but really mask as “bullies” and “haters”. Thanks to your blind hate and mediocrity, you just called almost 5 million people stupid.’

For the uninitiated, his ‘kids‘ are the some 200 big cats he claims to have rescued. And again, although he now regularly refers to BJWT as “The Sanctuary” it is not accredited by the GFAS.

He goes on to say:

‘We have also been accused of being a petting zoo for celebrities. First of all, we don’t charge for this, but how on Earth can you change the world without getting everyone involved?’

Here is a screenshot of BJWT’s ‘Sponsorship’ page wherein they list the various options for ‘sponsoring’ the animals in their care.

So, no, they don’t have a ‘price list’ stating: Play With Our Cats – $1,000. However, if you pledge to ‘sponsor’ a cat for $1,000 a month, you *do* get a 2 day visit for 2 people to the sanctuary where you can – wait for it – play with the cats! Apparently, for BJWT, ‘getting people involved’ means soliciting monthly payments in exchange for the chance to handle and play with the seemingly inexhaustible supply of newborn-adolecent big cat cubs in BJWT’s care.

Just where that inexhaustible supply of baby big cats comes from is one of the questions that will get you swiftly blocked from any and all BJWT social media sites, and subsequently criticized by them for “hating” on all the good they do.

Also from BJWT’s FAQs page under the heading ‘Does the Black Jaguar-White Tiger Foundation spay/neuter their kids?’

‘ABSOLUTLEY NOT. None of our kids are spayed or neutered unless they come to us like that. We prefer to use less invasive methods and technology, the oldest method is to separate the female from the male when she is in heat, our most usual option is giving birth control injections every six months. Nobody knows what tomorrow will bring, we would Love that someday in the future our Angels could help repopulate the Jaguar, Lion, Tiger and Leopard population in México, Africa and Asia. It is very easy to spay or neuter a rescued Angel, but perhaps in 10 years or so things will change and we would have recovered their natural habitat. ALWAYS THINK BIG. ALWAYS…’

The problem with this is that injection contraceptions are something still actively being developed. Even zoos do not entirely understand how they act on the animals who are injected. In other cases, implants are injected for contraception. What isn’t widely discussed in regard to implants is that unless the animal is cut open every six months, and the prior implant removed, a new implant is simply inserted alongside the old one. Meaning that over the course of the its lifetime, a cat might wind up with dozens of contraception implants under her skin. And no one is sure what sort of side effects this might have on their health.

Eduardo uses the term “injections” however, in my own research on the matter of contraception, I found that the term ‘injection’ was used interchangeably between literal injections of fluid contraception, and implants which are injected under the skin with a large gauge needle, so there’s no way to know for sure which type BJWT uses. What we do know, is that chemical contraception for big cats in general is considered tricky, with dosages requiring constant adjustment, and the long term side effects remain unknown. Overall, if one is trying to reduce the population of captive, privately owned big cats, it remains much more cost effective and efficient to simply spay and neuter the animals.

In regard to Eduardo’s desire to repopulate the wild with his ‘Kids’ in the future, at this point in time, it remains very questionable as to whether captive-bred animals released into the wild will meet with long-term success. Sustainable reintroduction practices of captive-bred big cats is tenuous at best, and likely decades away, at the minimum, something Eduardo admits when he says ‘perhaps 10 years or so things will change’ . Which means that the cats that BJWT refuses to spay/neuter now, will be far past the feasible breeding age in a decade or more when it might be possible to attempt captive breedings for wild release. There is also the question of muddied bloodlines. In short, there is no valid reason not to spay or neuter the animals he’s rescued.

Yet BJWT’s legions of fans remain blindly enamored of their practices. Thus it is refreshing to see news outlets beginning to report on the problematic actions of BJWT, rather than offering fluff highlights of whatever celebrity visited the foundation most recently and has plastered photos of themselves hoisting just days-old, vulnerable cubs around like they’re stuffed animals and not living things…

Yes, hopefully the days of highlighting BJWT with articles exclaiming over the adorableness of mishandled cubs, and dangerous interactions with adolescents, and adult animals are finally coming to a close. Hopefully people are beginning to understand the inherent hypocrisy of a man and foundation who post multiple photographs and videos showing big cats being treated like house cats on a daily basis and then add the hashtag of #NotPets.

Maybe, just maybe, people are starting to wake up and “escape the Matrix” that Black Jaguar White Tiger has so carefully constructed via social media.