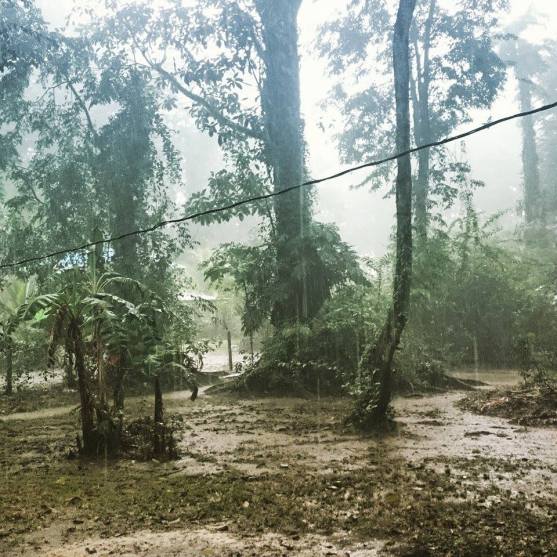 Field work is not glamorous. Nothing about being in the jungle, surrounded by bugs, submerged in rain and pooping out your intestines, and possibly half your body weight, is glamorous. The national geographic photos of a biologist in the field, studying an exotic something or other, while the sun sets beautifully in the background is a load of crap. What the photos don’t show you is your body’s complete inability to acclimate to foreign anything and everything. You don’t see the sleepless nights, wether it’s from stress, heat, disorientation or (if you are an inaugural ICARUS member) moving into what can only be described as the ground zero house aka the love shack.

In the nearly two weeks I have been in Costa Rica, I have cried twice, gone mental on my amazing research assistants more than a dozen times, stared at my bank account disbelievingly 467 times, cursed the world 845 times and questioned my sanity 5,678,243 times. I have contemplated giving up…….Not once. Not one damn time, did I ever say “I quit” Have I ever wondered if I would fail? If I would let down not only countless people, but the wildlife I love so fiercely? You bet your ass, I have. I might lose my sanity…and possibly any chance at a date in the next decade, but I stand to lose so much more if I pack it all in.

So, what is at stake? I spent yesterday morning with Becky Cliffe, who functions not only as my fundraising campaign manager, but who is my release advisor (and a PhD student herself) at the Jaguar Rescue Center. We spent the early hours getting briefed by the center’s big cat caretaker, Nerea. In addition to joining the rescue center, whose mission is to rehabilitate and release as many animals as possible, in their fight wildlife crimes, we are also working to assist them in what could be the first successful ocelot release in Costa Rica. 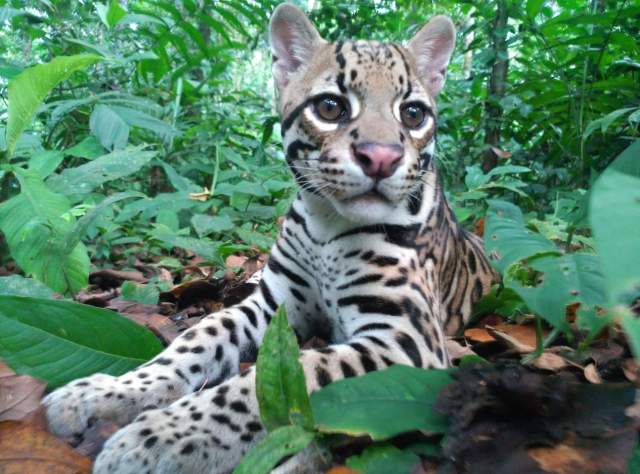 Namu came to JRC just a year ago as an orphaned cub, he was found abandoned and hiding inside of a tree trunk. His mother, who no one ever found, was probably a casualty of the mass construction happening in the area. That’s just one of the many threats the native wildlife faces here in Central America. Poaching, trafficking, and deforestation are just the tip of the iceberg. Namu is not the only victim. There are a myriad of animals who have been orphaned, injured or some who have sadly lost their lives that are in need of help, I have often been asked “What is ICARUS? What exactly are you doing out in the field?” Simply put, the function of ICARUS is to create a network that individuals and organizations across the globe can access to offer insight into wildlife welfare solutions. Think of it as a database filled with the knowledge of the planet’s most ingenious forward thinkers.

Costa Rican powerlines that cause incredible injury and death

Why are we here? In Costa Rica specifically? Well, you have to start somewhere. Namu is an excellent way to learn about the root cause of crimes against wildlife and reach out to other organizations for assistance. We are proving how ICARUS works on a small scale and then taking the expertise and success global.

So back to our current situation in Costa Rica in our effort to make ICARUS a living entity, this morning when Becky told me she quite possibly has a tapeworm, which for the record is not her first parasite in the six years she has resided in the jungle. You really just have to shake your head and laugh. Our lives are in no way spectacular by the standards Hollywood has created for the modern field biologist. No one really wants to shave off their hair because it’s turned moldy, take toxic anti parasitic drugs that turn your urine pink, or find a giant cockroach in their retainer case (Our sympathies to our field coordinator Sarah Kennedy), but they are all bizarre badges of honor. War wounds, so to speak. Perhaps your war wound is the scar you received the very first time you rode a bicycle, the scar from a life saving surgery or your first C-section. Whatever it is, it is unique and it makes you proud. We all wear our hearts on the outside, in various forms. We share our passions and our pride in our stories, in our wounds and it’s what we leave behind when we are gone. It is our legacy…and it all matters. All that I hope is that ICARUS matters. I hope it incites change. The truth is, ICARUS is not mine. It isn’t just my legacy, my badge of honor. It belongs to all of us. It belongs to our children. And most importantly it belongs to the animals we are striving to save and protect.