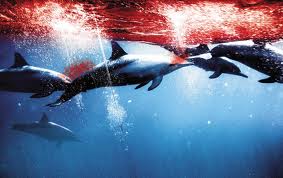 I’m sure a lot of you have now seen the movie ‘Blackfish’. A film which documented the life of whales in captivity at SeaWorld and other marine parks. This film really has done a lot to publicize and educate the general public about how wrong, inhumane and cruel it is to keep these animals in such awful conditions. Before that however there was a little film called ‘The Cove’ (it even won an Oscar). However this film has not received the publicity nor the views that it deserves because people cannot bring themselves to watch it. I myself had to force myself to sit down and watch it, not because I necessarily wanted to, I knew that it would be awful to watch, but because I knew I needed to know the truth. I have always loved dolphins, I think there is a huge global love for them. However being that person that cries the most when an animal dies in a film (30 whole minutes when the dog dies in ‘I am Legend’) I knew it would be awful, and it was, but this is not just a story – this is real life.

I can understand why people cannot bring themselves to watch it, it’s an honestly heartbreaking documentary, but underneath the horror there is a smart, educational and yes, even funny sometimes, film. Today marks the day when the dolphin murdering, and it can be called nothing else but murder, begins in Japan for yet another unnecessary year. So to honor those poor unfortunate animals that will be killed in their thousands again I wanted to write this for them and for all of you who want to know the facts.

Dolphin killing in The Faroe Islands

Where does it happen:

I would like to start by saying that this dolphin hunt does not just start and end in Japan. This is still happening all over the world; in the Faroe Islands, Norway, Greenland and in Taiwan to name a few. And I’m not here to bash the Japanese, there is a large portion of the population who do not agree with the hunts in anyway, in fact by the end of ‘The Cove’ you discover that most people don’t even know this is going on in their own country and they are just as appalled. But still an estimated 20,000+ dolphins and whales are killed every year in Japan alone, around 1,500 of these are killed in Taiji where ‘The Cove’ is set.

Why do they kill so many dolphins and why does the hunt happen?

There are multiple reasons given for why they do this. Of course they start off with the age old ‘It’s our heritage and customs’, but then why the need to kill SO many? Not only is the custom excuse completely fabricated, the hunts only originally started around 40 years ago, but custom is NEVER an excuse for the inhumane treatment of animals. As per usual the actual reason for these drives is MONEY, not too shocking really. This is because, although the large majority are killed, quite a few of these wild dolphins are actually sold to marine parks. They can fetch up to $200,000 or more per dolphin, and once the pretty ones are selected and bought, then the rest are murdered. Sometimes they have been tortured for days on end before they are killed like this instance in 2014.

Dolphin meat is also sold in Japan but it is actually highly dangerous for human consumption. Dolphin meat can cause mercury poisoning as it contains not just mercury but other toxic chemicals such as PCB’s. This meat in Japan is not even labelled to say it could be dangerous despite mercury having known health risks especially to pregnant women and children. In fact dolphin meat has been found packaged as whale meat (which is fairly healthy for you to eat) but it is actually the cheaper dolphin meat inside. So not only are they killing thousands of dolphins a year but they are also endangering peoples health at the same time! Good work guys.

Looking at all of this there really can only be one reason for the continuous killing of these animals – money, money, money. Heritage doesn’t even come in to it.

This, as you may have read in my previous post on Sea World, is why I now refuse to go to any type of marine park with whales or dolphins. Not only are the marine parks keeping these animals in tiny spaces and forcing them to perform tricks, but they are funding this horrendous annual dolphin drive and are the main reason why it continues. Again, these dolphins can get up to $200,000 or more for just one dolphin, it’s therefore a lucrative business for the people of Taiji.

Employees from dolphin parks have also been seen to be taking part in the killings and these are the people who are supposed to be looking after these animals?! If there is no one to come and buy the dolphins then there isn’t the need to keep doing the drive hunts.

“Dolphin trainers have tormented the dolphins for hours. Some are in shock. Others are seriously injured, and they can’t breathe. Now, they are going to be killed and slaughtered. Not even pregnant females or young calves will be spared. But the dolphin trainers, who claim to “love” dolphins, don’t try to save any of them. It is the cruelest scene we have ever witnessed.”

What happens every year in Taiji?

So I’m not going to go into an entire films worth of information for you but this is what happens every year in the cove. Pods of dolphins are ‘herded’ into Taiji’s cove by confusing them with sound, a steel pipe is struck with mallets to herd them towards land. Once they are in the cove they are shut in and the buyers from marine parks arrive to select their favorites. Mothers are ripped from their young and families are broken apart. The ones that aren’t picked are herded again into a naturally blocked cove that is not visible at any point to the public (I wonder why). If you try and get anywhere near this cove then you will be arrested. The dolphins then spend a night locked in this cove hyperventilating and constantly searching for a way out for hours on end. The panic and stress that is caused to these intelligent animals during this time can be be described as nothing less than torture.

The humans involved have a good reason for leaving them in this state though. Firstly they have been there all day and are probably exhausted, poor things. The actual killing of the dolphins can take up to 8-9 hours and they want to go home at the end of the day. They also know that it takes a long time for the blood to wash away and they are trying to keep this hidden from the general public. By doing it early the next day there is no one there to witness it.

Come sunrise the boats arrive and the killing begins. They still maintain that the way they kill them is humane. Read this and see if you agree:

“Just before sunrise, the fishermen herd the trapped dolphins into shallow water, close to the rocky beach. Here, they kill the dolphins with long, sharp spears. Often times, they stab the dolphins with sharp fishermen’s hooks and haul the still living dolphins onto their boats. The cruelty is enormous. The dolphins thrash about in their own blood, and the air fills with their screams. The fishermen push a sharp metal spike into the dolphins’ necks just behind the blowholes, which is supposed to sever the spinal cord and produce an instant “humane” death. In fact, we have film footage from hidden cameras that show the dolphins thrashing for minutes on end in agony. The fishermen even push wooden corks into the wounds to prevent spilling blood into the Cove, again to prevent us from filming blood-red waters.”

After watching ‘The Cove’ I have to admit I was hyperventilating crying, it is to this day one of the worst things I have ever witnessed. Yet I am strangely glad that I watched it. It certainly changed my views on a lot of things,  I was the girl who loved SeaWorld, had done a swim with dolphins and spent HOURS at the cramped dolphin pool at SeaWorld. I hope that this article alone has changed yours or at least had some kind of impact on you. If it hasn’t then please, PLEASE watch ‘The Cove’ (I’d love you all to anyway), it really will open your eyes. Dolphins are potentially as intelligent and emotive as humans and the mass murder of these wonderful animals is nothing short of barbaric, cruel and unnecessary. Please help be the change, they deserve to be free.

What can YOU do to help?

Firstly, for the love of dolphins, PLEASE stop visiting marine parks and funding them. You are helping to pay for this kind of practice to continue. It is again supply and demand, as long as they are making tons of money with dolphin shows then they are going to keep buying dolphins from places like Taiji, it is a vicious, brutal circle

Secondly: SPREAD THE WORD! Get people to read this, get people to watch ‘The Cove’, tell people what you have learned. The only way we can make a change is by trying to affect as many people as possible. If the facts and the pictures in this article have made you horrified and sad then I have done my job.

For any other ideas please go here http://opsociety.org/what-you-can-do/after-seeing-the-cove and if you really want to go all out then jump on a plane to Japan (I cannot guarantee that you won’t get arrested by Japanese authorities though)!

My Tweets
Join 1,710 other subscribers