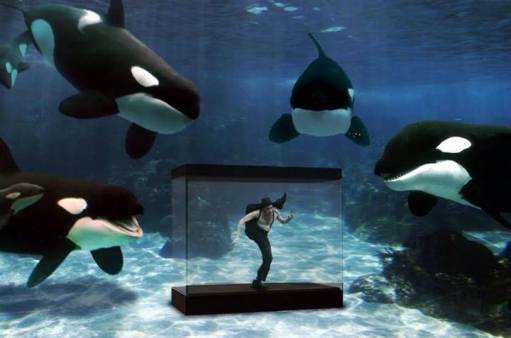 With the release of Blackfish, a film about the state of killer whales in marine parks, it really has brought to a wider audience the poor quality of life for whales and other mammals at sea life parks. India declared dolphins to be a non-human person and banned them from being allowed in captivity. Costa Rica is another place that has declared the same but until the mightiest of sea parks has folded this is not something that will happen worldwide. The truth is that SeaWorld keeps its animals for entertainment and money and helps no one but themselves. 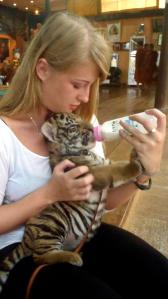 I of course waded into this argument because cetaceans is something I have always been passionate about. I have also made plenty of mistakes with wildlife (see above) so I’m not here to make you feel bad if you have been to SeaWorld or had a ‘swim with dolphins’ experience. As a starry eyed 15 year old I too visited SeaWorld on a family holiday. I’m not going to lie to you, I loved it there. I loved being able to feed the dolphins and I physically had to be dragged away from the dolphin pool by my parents. Of course at that age I had no realisation of the kind of life the creatures I was so enamored with were subjected to. I believed the ‘facts’ that SeaWorld only took in animals that wouldn’t survive in the wild and I didn’t see anything wrong with the whole place. I went back a year later and had the same opinion. I, at the same age, also had a ‘dolphin experience’ in Malta at a marine park. At the time I thought it was amazing but now I look back at it in horror as I recall the size of the pool (kind of a hotel sized pool) that housed two dolphins.

The result of the wild dolphin trade for marine parks

Up until a few years ago I didn’t really have a negative view of SeaWorld and other marine parks, then I watched The Cove and it really opened my eyes. Learning that wild dolphins were being herded into a cove in Japan, the handsomest stolen for marine parks and then the rest murdered (and it really is nothing but cold blooded murder) was shocking. I vowed never to go to SeaWorld again and begged my friends and family to do the same. I tried to get them to watch The Cove but was met with complaints that they thought it would be too horrible to watch. It is, but it’s also a brilliant documentary and the fact that the information provided is so brutal is alone a standing reason why you SHOULD watch it. I was also met with the same question, “What is so bad about SeaWorld? Don’t they rescue animals?” The sad truth is no and one person vowing never to go there again is not enough. 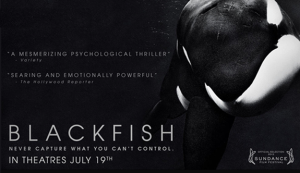 Whales of course have the same deal as dolphins in these parks. Both are kept in tiny environments, not just because of their size but because the endless ocean is their natural home. Both are forced to learn and do tricks for food. Something that certainly isn’t in their natural behaviour, whatever Sea World tells you. The film Blackfish focuses on specifically orcas in marine parks, in particular Tilikum, a male killer whale who has been involved in a lot of violent incidents, including the deaths of 3 human trainers. 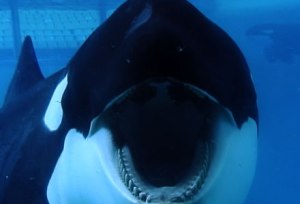 Tilikum started life as a free orca before he was taken from his mother and his home at the age of 2. He then lived in a cruel environment where they used food deprivation to teach him tricks and he was kept in 20×30 foot container for 19 hours at a time till his next show. Before even arriving to SeaWorld Tilikum was involved in the death on one of his trainers at this park. SeaWorld vowed that he would only be used for breeding purposes (don’t get me started on breeding into captivity) and would not therefore be forced to perform alongside humans. Of course within a short time span he was a star attraction in one of SeaWorlds ‘educational’ shows. We all know the end result and Tilikum famously killed his trainer Dawn Brancheau in 2010. The film argues that in the wild killer whales have never been known to harm humans and are actually intelligent and playful rather than psychotic killers. Tilikum is not the only example and killer whales in captivity attack not just their trainers but each other, sometimes fatally. The captive killer whales grow slowly madder and more bored at their existence of swimming around the same small area every single day of their lives eventually lashing out and injuring or killing themselves or others. 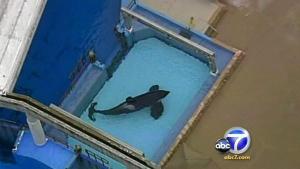 The tiny enclosure Tilikum was kept in after Dawn’s death

Nothing SeaWorld does is for the benefit of the animals they keep. They have had no new scientific knowledge released on any animals in their parks for decades, so they are not contributing to the science of whales in any form. Nor, like other species, do whales and dolphins thrive in captivity and well out-live their wild counterparts. In fact they live a much shorter life in captivity and die of diseases that they would never get in the wild such as St Louis encephalitis, a mosquito borne disease. Fin collapse also rarely occurs in the wild but is common in captive whales and many young calves that are born into captivity sadly die at an early age. Yet SeaWorld’s incestuous breeding program continues, for absolutely no good reason. So what really is SeaWorld contributing to the livelihood and welfare of these animals? The answer is quite simply, nothing.

One of the more horrifying whale deaths at Sea World: “Kandu slammed her head into Corky, severing a major artery in Kandu’s upper jaw. A ten-foot geyser of crimson spouted from Kandu’s blowhole. Over the next forty-five minutes Kandu bled to death as Sea World staff and the audience looked on in helpless distress. In the wild, these whales travel hundreds of miles with the whole ocean at their disposal. When enclosed in a small area, there is nowhere to run.”

Considering all of this why exactly are places like SeaWorld continuing to hold these animals captive when it clearly has no benefit to them? The reason: MONEY. Instead of welfare and knowledge SeaWorld and other marine parks in fact are concerned only with earning money at the detriment of these incredible animals. Many of them could easily be rehabilitated if they did indeed arrive injured or ill but the majority of them are stolen from the wild not rescued or bred into captivity and then stolen from their mothers at a young age. However the ones that are able to learn the tricks quickly have no chance of ever being rehabilitated. Instead they become like elephants in circuses, forced to perform tricks and living in sub-par environments. The sad truth is although SeaWorld is clearly neglecting and abusing these animals it is it is probably one of the better marine parks in terms of animal welfare. Many others keep the animals in smaller pools and treat them far worse than SeaWorld do. Still in all of these places money trumps education and rehabilitation especially when you’re making profits of over $300 million a year (and famously not paying tax either).

The bottom line is they are deceptive; they mislead the public, saying that they rescue animals and educate people. In their shows for example they tell the audience that whales live to around 25 to 30 years, in captivity yes, but in the wild it can be up to 90. They mislead their trainers who are brainwashed into believing they are doing something good. Many previous trainers have come out to say they are ashamed for the information they have given to people and that Sea World put their lives at risk by not even telling them that Tilikum was involved in the death of a previous trainer when he arrived there. The most important fact remains that they are doing absolutely nothing that contributes to helping animal species and are instead hoarding wild animals simply to earn a buck. Many bucks at that. But of course isn’t that the sad truth of it, these places will continue to run as long as people go there and are also brainwashed into believing that SeaWorld are actually doing a good thing. You believe that they are helping the animals, because that’s certainly the view they give when you are there. I was one of those people who believed everything I was told when I visited. Thankfully with the release of Blackfish more and more people are beginning to realise that instead of helping they are in fact torturing these animals into madness and keeping them in conditions that remain utterly inadequate for beings so intelligent. And SeaWorld’s shares and visitor numbers are showing the backlash of Blackfish.

So on the behalf of at least two species, who are nearly as intelligent and emotional as you, I beg you to never enter a sea park again. Get your family and friends not to go too, spread the word! I know how amazing it is seeing these beautiful animals up close and personal but I can promise you it’s 100 times more magical seeing them in the wild. If you go to places like SeaWorld you are just continuing to fund organisations that steal animals from their natural environments and make them live awful lives in tiny tanks and forcing them to perform tricks for your entertainment. In short you are helping to support animal cruelty. Please don’t do it.

I have linked a lot of articles in this blog too for more information the best ones however are:

You can also donate to the The Cove here: http://www.thecovemovie.com/

I have linked a lot of articles in this blog too for more information the best ones however are:

and then donate here: (you did watch it for free after all!) http://www.thecovemovie.com/

3 thoughts on “What IS so bad about SeaWorld?”